I have received 2 inquiries today concerning the recent and horrific murder of George Floyd, who was killed May 25th 2020. However, I’m sure there are others who are hurting at this time as well and have questions. My heart goes out to the George Floyd family & all those affected by this injustice. Because of this, here is a statement that I hope will bring some clarity from my heart to this inexcusable act.

While all must grieve, we understand that in the hearts of our fellow citizens of color, incidents like these connect to a long history of unequal justice in our country, going back for a long time. The images and information we have available to us in this case are horrific and remind us that there is much more work to be done to ensure that there is not even a hint of racial inequity in the distribution of justice in our country. We grieve to see examples like this of the misuse of force, and call for these issues to be addressed with speed and justice. 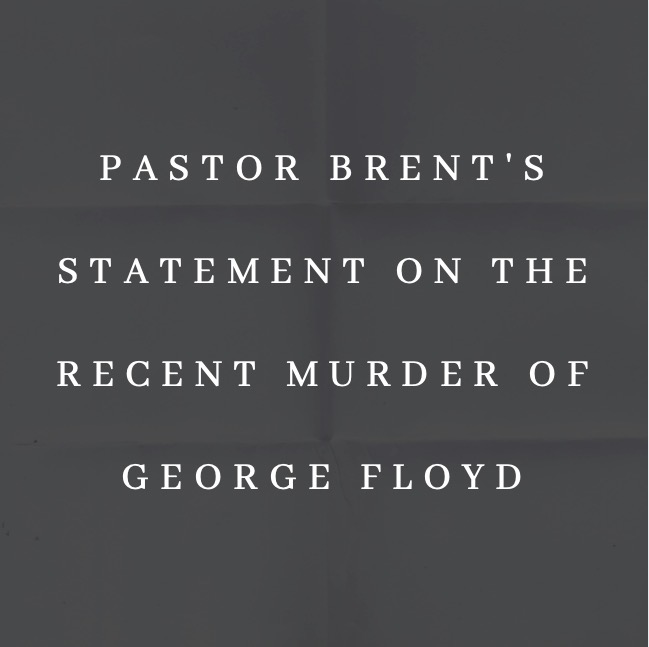 While we thank God for our law enforcement officers that bravely risk their lives for the sake of others and uphold justice with dignity and integrity, we also lament when some law enforcement officers misuse their authority and bring unnecessary harm on the very people they are called to protect. We further grieve with our minority brothers and sisters in the wake of George Floyd’s death, pray for his family and friends, and greatly desire to see the misuse of force and any inequitable distributions of justice come to an end.

Throughout the Old and New Testaments, the Bible speaks to matters of justice and human dignity. We are taught by Scripture that human beings are distinct among the rest of creation as those beings which bear the Divine image. From the beginning of life to its’ end, all human beings, both male and female–of ALL ethnicities, colors and ages–are sacred beings whom God values and loves.

Throughout the law, the prophets, the gospels and the entire canon of Scripture, murder is condemned and God’s people are called to protect the vulnerable. The Bible further condemns injustice and the misuse of authority and force. And in the example of Jesus Christ, God’s people are called to love others, care for their needs, grieve with them in brokenness and labor for the well-being of our neighbor. To follow Christ is to follow the example He puts before us.

Therefore, as a matter of Christian obedience and devotion, followers of Jesus Christ should support our brothers and sisters, friends or others whom we seek to win for Christ when they or their family members are mistreated, abused or killed unnecessarily.

Therefore, we pray for our local, state, and national leaders as they seek justice, and call on them to act quickly and diligently to ensure that these situations are quickly responded to and resolved if possible. May God give us His wisdom and strength as a nation and as His people in this time.

Yours because of the Cross,

UPDATE 5/1/2020 – We continue to be overwhelmed by your generosity in the giving of your prayers, your time, and your money. Because of you, Cascade Hills is continuing to make a huge impact for those in need as we show we truly are “The Church for the Unchurched.”

We continue to pray for everyone affected by this crisis. Our biggest prayer is that an unchurched person will see God’s love and find Jesus. We are happy to report last week we celebrated 17 salvations and 7 baptisms!

Thank you for your continued prayers and for your sustained giving during this time. You are a vital part of Cascade Hills Church and you are making all the difference!

UPDATE 4/17/2020 – During this time of social distancing, it’s such a blessing to see the many positive ways our community is still being helped. Because of the continued generosity of you, the people of Cascade Hills, here is an update on how we are continuing to be The Church for the Unchurched by reaching out into our community:

UPDATE 4/2/2020 – Because of your continued generosity, here is a brief update of how we have reached into our community and the world over the past few weeks:

We continue to pray for everyone affected by this crisis, and our main goal in partnering with these local agencies is that an unchurched person will see God’s love and find Jesus. With that, we are most excited to inform you that since we have had to be exclusively online due to COVID-19, this has not stopped our mission at Cascade Hills of making fully devoted followers of Jesus Christ. Since March 14th, we have seen 33 salvations and 4 baptisms. And this is worth celebrating!

Thank you for your continued prayers and for continuing to give during this time. You are making all the difference!

UPDATE 3/19/2020 – While news headlines continue to remind us of the troubles in the world, we wanted to take a few minutes to share some of the ways we are making a difference with your help.

Here are a few ways your giving is making a difference in the upcoming week:

Please stay tuned as we will be updating the page as new opportunities become available.

UPDATE 3/16/2020 – Please note, we are postponing our Love Works Week. As you know, with the recent Corona Virus situation, most of the organizations we were planning to serve have had to close or limit access due to new CDC recommendations that for the next 8 weeks, organizers cancel or postpone in-person events that consist of 50 people or more throughout the United States. Therefore, we have decided to postpone all serve opportunities until the Corona Virus situation is behind us. We will notify you as soon as we determine what those dates will be. We hope that you will still be available to help at that time, so please be sure to check your email and social media for updates. We will reach out to you as soon as plans are finalized. Also, as we are told of community needs that arise due to the Corona Virus situation, we are going to do our best to meet those needs and will keep you updated through social media on the ways you can help us do that.

How is Cascade Hills Church responding to COVID-19?

We want to respond to this situation with both wisdom and care during this vulnerable time. We first must remember what Paul wrote in 2 Timothy 1:7, “…God has not given us a spirit of fear and timidity, but of power, love, and self-discipline.” In an effort to do our part to keep the people of Cascade Hills safe, we have decided to cancel all services and on-site activities until further notice. During this time, however long it may be, we are going to continue to minister to you and your unchurched friends and family.

UPDATE 3/13/2020 – We will not be meeting at our physical location, but we are still going to meet together online. Because we have over 400 volunteers and staff and over 3,000 in attendance during our weekend services, we feel we are doing what is best for your safety. Our people are always more important to us than our programs. We can’t come together physically, but we can still be together online. Each week, there are already thousands across the world who join us online, so this is a unique opportunity for us to all join together as one. Here’s how:

To participate online for any of these activities, please visit the respective ministry pages via the main menu above.

Most importantly, know that we are praying for you and for the people who have been affected by this virus. If you have any questions in the days to come, be sure to follow our social media accounts. We are managing this situation moment by moment. As of now, our plans for Love Works and our upcoming Easter service at the Civic Center remain unchanged. In the days, and possibly weeks to come, we will be monitoring the situation and will provide updates via social media. One thing is for sure: We will continue to be the Church for the Unchurched and pray that God would use Cascade Hills through this unsettling time.